MIAMI -- A trio of Venezuelans are the candidates for best Latino shortstop ever in ESPNdeportes.com's Estrellas Latinas, whose complete team will be presented during the All-Star break in July. 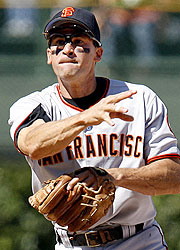 While the first two weeks were for first and second basemen, respectively, the third will be for shortstops, one of the elite positions in baseball.

Luis Aparicio, Omar Vizquel and David Concepcion were selected as the finalists from a prelimnary list with the greatest Latino shortstops of all time, which included Tony Fernandez, Alex Rodriguez and Edgar Renteria.

Aparicio was not just one of the first Latino stars in the Major Leagues, but is also one of the greatest shortstops in baseball history, and the only Venezuelan in the Hall of Fame.

In 18 seasons he hit .262, won nine Gold Gloves, was selected to ten All-Star Games and was the A.L. Rookie of the Year in 1956. "Little Louie" finished with 2,677 hits and scored 1,335 runs with the Chicago White Sox, Baltimore Orioles and Boston Red Sox.

Dave Concepcion was part of the "Big Red Machine" in Cincinnati in the 70's that reached four World Series and won the Fall Classics of 1975 and 1976.

Concepcion was an extraordinary defensive player (he won five Gold Gloves) and a clutch hitter, winning two Silver Slugger awards, driving in 950 runs and finishing with 2,326 in 19 seasons.

Vizquel, who will soon turn 40, is the second best defensive shortstop in history, behind Ozzie Smith. Last season, the Caracas native became the oldest shortstop to win a Gold Glove (the 11th overall for Vizquel; Smith won 13).

Taking into accout that Vizquel has no plans to retire afer this year, the Giants' shortstop could build on his already impressive stats and strengthen his Hall of Fame possibilities.

Because of his 11 Gold Gloves and his consistency at bat, Vizquel is second to none among Latino shorstops in Major League history.