MEXICO - An exclusive property of American drivers for decades, the NASCAR series returns to Mexico, looking forward to to establishing itself in the taste of the local fans - with a little help from the local drivers, who will rent Stock cars again and give way to their dreams of, one day, challenging Americans on their most traditional ovals.

For the third straight year, NASCAR Bush will race at the legendary Autódromo Hermanos Rodriguez, which has seen some of the best drivers of the past 50 years.

Today, as in the past years, half a dozen Mexican drivers will try to prove Americans can be beaten in their most popular motor sports category, which is followed by more fans than any other Formula competition.

Adrian Fernandez, Jorge Goeters, Carlos Contreras, Michel Jourdain, Ruben Pardo, Rogelio Lopez and German Quiroga, along with some other last-minute participant, such as Antonio Perez, will compete for a few hours in the series which continues to return to Mexico, without leaving much of a mark. For more than a sport which Mexicans follow throughout the year, this is only a show that lasts a few hours and gathers fans looking forward to seeing the glamour of a series… and which gives them a chance to take their pictures with spectacular escorts, almost all nationals - for NASCAR comes from the US, but the appeals are local.

"I'm motivated to return, because with a team like this one we will always be fine and you always want more," said Michael Jourdain, one of NASCAR Bush stars, who became the best Mexican in 2006 by starting 14th,, and, after leading for a couple of laps, was forced to abandon the competition for touching Kyle Busch.

Jourdain arrives with the best possible team, for he will race the car with which Matt Kenseth won last Saturday's NASCAR Busch Fontana. Property of Jack Rouch Racing, this car gives Jourdain a chance to win on the track managed by his father Michel Jourdain for almost a decade, and which became Jourdain Jr's second home. Consequently knows every inch of the grounds.

But this NASCAR race is not only different because of the Mexican drivers who liven up the grid and who will strive to marvel the crowd, as Jorge Goeters did in winning the pole in 2005. It is also strange for many of these drivers to be racing in a circuit.

In fact, after Mexico's 2,518 miles, they won't race in another circuit until Montreal, and then in Sonoma and Watkins Glen. The other 26 races are run in ovals.

"We arrived without practice, without special training, because here money rules," complained Jorge Goeters, who claims to be physically prepared and 'ready for the challenge'.

Jourdain and Goeters are considered potential surprises, even though experience favors Adrian Fernandez, who will compete in his third NASCAR Busch, after coming out 10th and 12th in the first two. 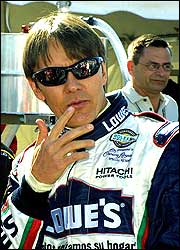 "I feel honored by the opportunity of being a part of Lowe's-Hendrick Motorsports and NASCAR," said Fernandez recently, who practiced in the Homestead oval. "The fans get more exited every year by this race, and I think it will continue to grow and it will prove NASCAR's popularity outside the United States."

RECENT HISTORY
It Looks like a long way back since Feb. 28, 2005, when NASCAR and OCESA signed the 10 year agreement of collaboration in order to hold the Series in Mexico.

"This important step in NASCAR's expansion shows our long-term commitment to build stock car racing in Mexico and to make the sport more attractive for Mexican fans in Mexico and the US," said then NASCAR's CEO and chief executive Brian France. "NASCAR Mexico is a bridge that makes NASCAR more relevant for the Mexican-American community. Along with recently launched NASCAR Canada, NASCAR Mexico gives our sport a strong unified standing across North America."

They were looking for new markets when they came across the ideal partner in OCESA, a subsidiary of CIE Group, which since the 1990s has become Mexico's top firm when it comes to organizaning shows, first with concerts, and then with sports events.

"We committed to supporting and launching Mexican motor sports some three years ago, and I believe this partnership with NASCAR strengthens the bond of our commitment, and fulfils the promise of making of the Corona Challenge the source of pilots which will represent us in NASCAR's ovals in the immediate future," said Rodrigo Gonzalez Calvillo, director of CIE.

A few months after closing the agreement, NASCAR arrived in Mexico with all its fanfare, its dozen trailers, 750 horsepower cars and American drivers, and tried to blend in with the national racers and escorts in small bright-colored clothing, carrying the local sponsor's logos.

The Hermanos Rodriguez came alive with the presence of 43 cars trying to make it to the Telcel-Motorola Mexico 200, testing the Goodyear tires in the asphalt which has been often criticized for its bumps, and even censored at the end of the 1980s by Brazilian Ayrton Senna in his F1.

Goeters' pole and his leadership in the first laps of the race made the crowd of 132,548 people dream about beating the Americans, about avenging all of the Mexicans unsuccessful attempts of beating their neighbors on American soil.

But it was a dream, crushed by Martin Truex Jr's win, proclaimed by thousands of voices quenched by Coronas, who had to make do with Adrian Fernandez's10th place.

In 2006, the hope remained intact, though this time it was Jourdain carrying the peoples' dreams. But Denny Hamlin again salvaged the American pride, and Carlos Contreras, who came out 11th, had the best local performance. He was followed by Cuate Fernandez and Goeters (14th). Far behind came Rogelio Lopez, 29th, Jimmy Morales, 39th, and Carlos Pardo, 42nd. 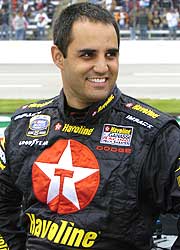 NASCAR Busch is back, but the conditions have changed with the creation of a new international series. Under a licensing agreement with NASCAR, the Corona Challenge -- the Nr. 1 Stock Car series in Mexico -- will become, as of 2007, the NASCAR Mexico Corona Series and it is there where the organizers aim to send their drivers, so they are not only visitors in Hermanos Rodriguez and but can also compete throughout the year, to become box office magnets together with Colombian Juan Pablo Montoya, who has become the main attraction for Latin Americans, but faces a terribly challenging responsibility.

"It's the toughest category in the world, not only are there 42 drivers on the track, there are also 100 Americans waiting for a spot, a chance," said Carlos Contreras in a chat with ESPNdeportes.com. He acknowledged having been through some rough patches when he made it to NASCAR Trucks, because everyone was against him and found it impossible to make it to the top without team work.

"The situation of Hispanics like Montoya is difficult, it's not impossible to win, but by being one against 43 Americans, I think they don't want a foreigner winning a NASCAR race, but I believe we will make it soon. Juan Pablo Montoya is the star, he is the first F1 pioneer in NASCAR and has all the support," Contreras said.

Even though he is not Mexican, Montoya will feel like racing at home, for he enjoys the support of a crowd who loves the underdog, and a numerous Colombian community is preparing a great welcome in his honor.

And if Montoya has a chance to win, it will be precisely in Mexico, and not only because of his support, but also because even though he has limited experience with Stock Cars, he is an expert in getting the most out of circuits. Here, he won't have to worry about walls and multiple accidents on some curve.

The cost of the tickets is also peculiar, for OCESA watches carefully for its audience and knows high prices would mean empty bleachers, so for less than $100 for the most expensive seats, fans may buy a pass for the entire event, to see the NASCAR Busch, the NASCAR Mexico Corona and the Grand Am, another attraction with its prototype cars.

The profit may not yet be what the organizers expect, but it will weigh in the pockets of the people living in the blue-collar neighborhoods surrounding the racetrack, who are ready to take to the streets in order to divide every inch of the sidewalk with buckets, which will only be removed in exchange for 50 pesos a day.

"Your car will be safe, nothing will happen to it," says an eager 10 year old, who makes of NASCAR a small gold mine, which can mean a higher profit than his whole family could earn in a month, considering their minimum wage doesn't even pay 5 dollars a day.

Enrique Vega is a senior editor with ESPNdeportes.com in Mexico.